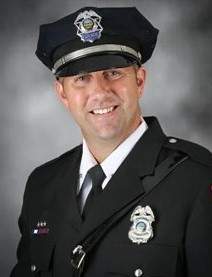 He was born in Bellefontaine May 14, 1977, a son of Teresa (Colesante) Beebe and the late Roger Comstock. In addition to his father, Craig was also preceded in death by a sister, Lacey Arthur.​

Craig was a 1995 graduate of Benjamin Logan High School where he excelled in sports.  He played football, baseball and basketball. His 1995 football team was recently inducted into the BLHS Hall of Fame. Craig was lucky enough to have his best friend, Rob Powell by his side his entire life.  They have been friends since elementary school and have a lifetime of memories.

After high school, Craig felt the pull to become a police officer and soon joined the Bellefontaine Police Department.  During his almost eighteen years of service, Craig was chosen by his peers as Officer of the Year in 2013. The last nine years of his tenure were spent as a narcotics detective.  Craig worked hard to keep our community safe.

Craig married the love of his life Michele, June 10, 2000.  They would have celebrated their twentieth anniversary in two months.  They both graduated together and went on their first date two years after high school (thanks to their Mothers).  From that moment on, they have been inseparable.

Craig was a jack of all trades; Mr. Fix-It, Mr. Muscle, the Car guy, baseball coach and so much more.  He was a straight shooter filled with sarcasm and wit.  Everyone that knew him has a funny story to tell.  He could make anyone laugh.

Above all else, Craig was a family man.  His two blessings Cole and Carisse were his world.  He loved watching them play sports and never missed a game.  He was supportive and encouraged everything they tried.  He taught his kids honesty, respect, integrity, manners, and gratitude.  He always told his children how much he loved them and how proud he was of them.  He was the best example of a Dad.

My husband, Craig was the man of my dreams.  I have spent the last twenty three years of my life with my best friend and soul mate.  He was my Rock and my Protector.  He was our home and the center of our universe.  I love him deeply, completely, and endlessly. He was my everything. He showed me unconditional love and support. What we had was special and I’m holding onto it for the rest of my life.

We have lost a great Man far too soon. Our hearts are broken. A finer Son, Brother, Husband, and Father couldn’t be found.  He will be greatly missed.

The family will receive friends from 1 to 7 p.m. Monday, April 20, 2020 at the Eichholtz Daring & Sanford Funeral Home and Cremation Center in Bellefontaine. In strict observance of the COVID-19 guidelines, the funeral home and family ask that friends adhere to the following visitation schedule:-  using the first letter of your last name, those guests whose last name begins with the letters A thru D will be welcome between the hours of 1 to 2 p.m.; E thru H from 2 to 3 p.m.; I thru L from 3 to 4 p.m.; M thru Q from 4 to 5 p.m.; R thru U from 5 to 6 p.m.; and V thru Z from 6 to 7 p.m. The funeral home staff will monitor the number of guests inside the funeral home throughout the visitation.

A private funeral service will be held at the convenience of the family.

A procession to honor Craig’s service to our community will take place at approximately 1:00 p.m. Tuesday, April 21, 2020 beginning at the Eichholtz Daring & Sanford Funeral Home and Cremation Center in Bellefontaine then traveling South on Main Street to Gunntown Road. The public is invited to safely park along this route to observe the procession and pay their final respect.

To order memorial trees or send flowers to the family in memory of Craig W. Comstock, please visit our flower store.