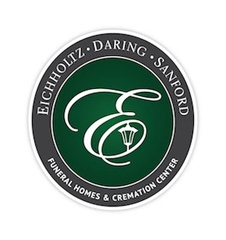 Don Jones passed away peacefully on Monday evening, May 10th at the age of 89 years old.

Don was born in Gilwren, Wales, and immigrated as a young man to the United States. After living in Cincinnati Don moved to Bellefontaine, Ohio where he owned and operated The Stoney Creek Trout and Gun Club in DeGraff, Ohio for many years. Don was an avid sportsman and taught people the “correct” way to fly fish and wing-shoot. His immense wit and charm were enjoyed by all who met him. He was a complete Welsh gentleman, who insisted on proper form and etiquette, but always with a sparkle in his eye and a grand sense of humor.

Don is survived by his wife Beth, his daughter Cathy and his three grandchildren Dan, Josie and Rob.

The family will be having a private service at a later date.

The staff of the Eichholtz Daring & Sanford Funeral Home in Bellefontaine is honored to serve the Jones family.

To order memorial trees or send flowers to the family in memory of Evan John Donald Jones, please visit our flower store.