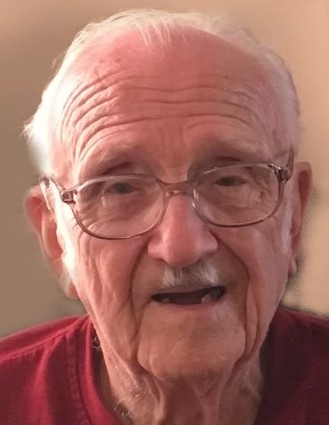 Harold Kenneth Gardner passed away on his 100thbirthday, Saturday, June 5, 2021 in the Artis Senior Living of Mason.

On March 13, 1943, he married Margaret O. (Barth) Gardner and they were married for 71 years until her passing on October 21, 2012.  He is also preceded in death by a son, Michael Allen Gardner in 1987 (as a result of Agent Orange exposure while serving in Vietnam), and two brothers, Carl and Dale Gardner.

Harold served in the U.S. Navy and was attached to the 5th Marine Division during WWII.  He saw action at Iwo Jima and later in occupying Japan.  He retired in 1989 from SuperFoods Services in Bellefontaine, where he worked as a meat specialist for 34 years.  He then worked as the meat manager for Thoman’s IGA, West Liberty for 12 years.  He was a life member of the Harold Kerr Post of the American Legion for 66 years.  He served as a two-time Legion Commander and was the former business manager of the Angels of Ohio Drum Corps.

Harold, along with his wife were longtime members of the First Lutheran Church, Bellefontaine.  During retirement, he loved growing flowers and bird feeding.

In lieu of flowers, the Bartfield family requests memorial contributions be made to the American Heart Association  5455 North High St.  Columbus, Ohio 43214

The staff of the Eichholtz Daring & Sanford Funeral Home & Cremation Center in Bellefontaine is honored to serve the Gardner family.

To order memorial trees or send flowers to the family in memory of Harold Kenneth Gardner, please visit our flower store.
Send a Sympathy Card