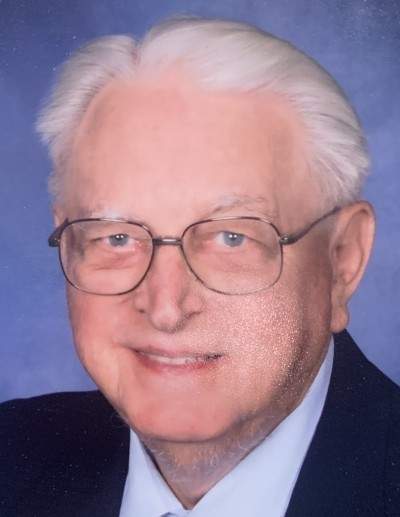 On July 2, 1952 he married Janice M. German in Dayton, Ohio. She preceded him in death.

He is survived by his daughters, Rev. Deborah Bowsher of Zanesville, Ohio and Barbara Bowsher of Dublin, Ohio; two Godchildren, Zachriah and Carlina and their parents, Phil and Lori Showalter of Bellefontaine and several nephews and nieces. He was preceded in death by his parents and brothers, Jack Bowsher and Chester Bowsher.

After graduating from Fairmont High School in Dayton, Jim joined the U.S. Army and fought in the Battle of the Bulge in World War II. He later graduated from the Cincinnati College of Embalming. For many years he was a partner in the Routsong - Bowsher Funeral Home, retired from the Champion Chemical Company and served as President of the Ohio Embalmers Association. James was active in the Freemasons and was awarded the designation of KYCH for his service. He loved making things with his hands, and often gifted loved ones with beautifully crafted wooden clocks or furniture. He also enjoyed caring for his home and yard and planted a number of fine trees at their home which sits above Mary Rutan Hospital in Bellefontaine. After his wife’s passing, Jim moved to the Ohio Veteran’s Home in Sandusky where he brought laughter to those who cared for him.

James will be buried in Bellefontaine Cemetery after a private graveside service led by Rev. Forrest Amidon (H.R.).  Because of the pandemic, there can be no visitation.

The staff of the Eichholtz Daring & Sanford Funeral Home & Cremation Center in Bellefontaine is honored to serve the Bowsher family.

To order memorial trees or send flowers to the family in memory of James Nelson Bowsher, please visit our flower store.