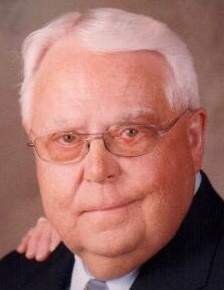 Jim was born August 11, 1929 in Galion, Ohio, the son of Floyd and Rosina (George) Sebring.  Jim’s family moved to the Russell’s Point area when he was three years old.  Everyone that knew him enjoyed listening to his many stories about the Russells Point area.  During his early years, he worked in the amusement park on both the Showboat and Sandy Beach sides traversing the bridge between the two too many times to count and helping the big bands to set up in the open air dance land.  He worked at the Plaza Hotel as the head bell captain, different games of chance, and the frozen custard stand that his parents owned.

After graduating from Lewistown High School in 1950, Jim was drafted into the Army January 29th, 1951 and received his basic training at Ft. Knox, Kentucky.  He served overseas in Japan and Korea in the 24th Division 6th tank battalion delivering supplies to the front line until July 1, 1952.  He then returned to Japan until he transferred to the reserves in December 1952 until his honorable discharge March 29, 1957.

Jim married the former Patricia A. Gregg April 25, 1954.  They worked side by side many years as the owners of Don’s Hamburgers until their retirement in 1994. Together they enjoyed traveling abroad as well as across the country in their Airstream trailer to locations such as Alaska, Mexico and especially enjoyed a trip to China with friends.  Jim enjoyed telling stories about growing up in the Russells Point area and the many customers he served at Don’s Hamburgers.  He was a member of the First Lutheran Church and Bellefontaine Lodge #209 F&AM.

Jim is survived by his wife Pat of sixty five years; a sister, Dorothy (John) Barr; a son, Scott Sebring and a daughter, Rebecca Sebring. Jim also has two grandchildren, Marlissa (Marci) Sebring and Ryan Sebring along with several nieces and nephews. He was preceded in death by his parents and a sister, Gladys (Ernest) Woodard.

The family will receive friends from 10:00 a.m.  to 11:00 a.m. Monday, December 2, 2019 at the Eichholtz Daring & Sanford Funeral Home & Cremation Center in Bellefontaine, where Pastor Larry Novak will officiate the funeral service at 11:00 a.m.

Burial will follow the funeral service at the Philadelphia Cemetery.

To order memorial trees or send flowers to the family in memory of James C. Sebring, please visit our flower store.