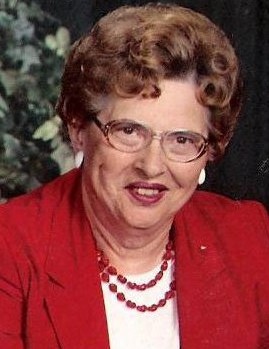 Jean was born to the late Paul J. and Jane Ruth (Licklider) Sprague on her grandma Rebecca’s farm on Coddington Road in Johnson Township in Champaign County April 10, 1930.  At the age of 2, her family moved to a farm on State Route 29 and they attended Carysville Christian Church until 1938 when they attended Mt. Pleasant Baptist Church on State Route 235 south of Kiser Lake where she Jean became a member of the church in 1944.  She attended school in Rosewood from 1936 – 1948 and graduated from Harrison-Adams High School in May of 1948 as co-valedictorian of the ten member class.  She attended Miami University from June 1948 – August 1949 and received a Cadet Teaching Certificate.

Jean married Richard G. Walborn August 29, 1949 in the parsonage of the West Liberty Christian Church and made their home on the Walborn Farm on Couchman Road in Harrison Township in Champaign County.  They later moved their house outside of West Liberty, where they started Hobby Horse Hill Cider Mill and they adopted Paul and Phyllis.  The family raised and showed sheep, horses and donkeys.  They pressed apples and made cider for many years.

After Richard died in 2002, Jean married Bobby Gantz in 2005.  They lived happily together for fourteen years until his passing in November of 2019.  She was also preceded in death by her son, Paul Walborn.

Friends may call at the Eichholtz Daring & Sanford Funeral Home in West Liberty Thursday, February 27, 2020, from 5 to 7 p.m.

To order memorial trees or send flowers to the family in memory of Jean Louise Walborn-Gantz, please visit our flower store.
Send a Sympathy Card