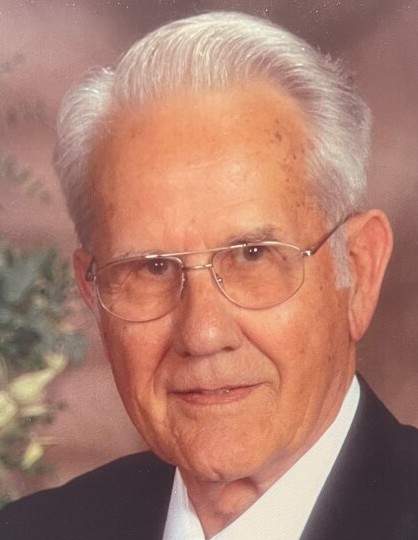 On Thursday, May 20, 2021, John C. Plank, loving husband of Joy (Hostetler) Plank, passed away in his sleep in the early hours of the morning at the age of 95. John was preceded in death by his father Joe L. Plank; his mother, Addie (Yoder) Plank; a grandson, Ken Plank; a brother, Harley (Clarabel Hostetler) and a sister, Ruth (Wilfred Lehman).

John was born November 8, 1925 in West Liberty, Ohio. On February 1, 1948 (73 years) he married Joy Hostetler and she survives. Together they raised three sons: Doug (Suzanne), Dennis (Connie) and Darry (Paula). Brother Lee and wife Donna live in rural West Liberty. John and Joy have six grandchildren, seven great grandchildren and numerous great-great grandchildren. He has many cousins, nieces and nephews.

John was a member of the class of 1943 at West Liberty High School. He was a World War II Veteran serving in the United States Navy from 1944-1946, one year of which he served in Okinawa. A lifetime resident of West Liberty, the community was dear to him. He knew hundreds of area farmers through his many years work at the elevator. He served on the fire department for twenty two years, the City Council for eleven years, president and coach of the WL Youth Baseball Association, founding member of the Mac-O-Chee Quarter Midgets of America, a pioneer in building the track at Lions Park and was inducted into the Quarter Midget Racing Hall of Fame in 2009. He was a 73-year member of the West Liberty American Legion Post 509. He exhibited his restored gas engines at the West Liberty Labor Day Festival for nearly fifty years. He and Joy were regular participants in many community activities. John was a member of the West Liberty United Church of Christ.

The family will receive friends from 10 to 11 a.m. Tuesday, May 25, 2021 at the Eichholtz Daring & Sanford Funeral Home in West Liberty where the funeral service will begin at 11:00 a.m.

Burial will follow the funeral service at the Fairview Cemetery in West Liberty with military rites performed by the Logan County Veteran Honor Guard.

To order memorial trees or send flowers to the family in memory of John C. Plank, please visit our flower store.