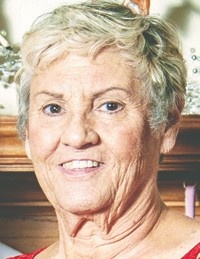 Judy was born February 22, 1938, to Frank and Martha Wish, owners of Hopewell Dairy in Bellefontaine, Ohio. After graduating from Bellefontaine High School in 1956,  she married Robert W. (Bob) Groves Jr. that same year and went on to have three children, Robert III, Jon Michael, and Jane Elizabeth.

Judy and Bob operated Bob’s Marathon service station on S.Main Street in Bellefontaine and in 1961 established Wish-Groves Farm Inc., a dairy farm on Troy Road which they operated through the early 1980's.  After assisting an ill friend with operating her beauty shop, Judy eventually took over the business and established the Empress Beauty Salon in Bellefontaine and the Empress II in Russells Point, Ohio.  Judy and Bob were active in the Calvary Baptist Church, Logan County Farm Bureau, Logan County Agrarian Club and the Bellefontaine Elks Club.

After selling the farm and the beauty shop in the early 80’s Judy and Bob retired to a home they built on Organ Street in Bellefontaine in 1960. Bob passed away in 2005 and Judy remained in Bellefontaine until 2008 when she moved to Michigan so that her son Bob and daughter-in-law Kathy could help her manage her health concerns. In 2009 she met Gerald C. Harter in Brighton, Michigan and they married. Several years later they moved to Alabama and later moved to Florida, ultimately settling in North Port, Florida. Judy relocated to Texas in 2021 so that her son and daughter-in-law could help manage her health care needs.

Pastor Scott Anderson will officiate a graveside service at 2:00 p.m. Sunday, May 8, 2022 at the the Huntsville Cemetery in Huntsville, Ohio.

In lieu of flowers, memorial gifts may be directed to:

Tuberous Sclerosis Alliance (https://www.tscalliance.org/honor-a-loved-   one/) an organization dedicated to fighting the disease that has affected her grandson Ryan.

The staff of the Eichholtz Daring & Sanford Funeral Home & Cremation Center in Bellefontaine is honored to serve the Groves and Harter families.

To order memorial trees or send flowers to the family in memory of Judith Ann Harter, please visit our flower store.