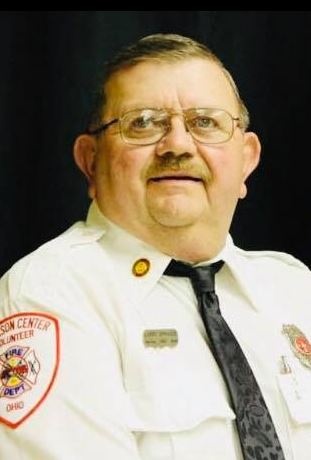 Larry Sprague, 67, of Jackson Center has exchanged his fields and the peacefulness of “The Pond” for heavens pastures.

A graduate of Jackson Center High School, Larry’s primary occupation was a life-long farmer. He spent some time dabbling with hogs, but always enjoyed fresh turned dirt, the planting of seeds and a “good” harvest.  Next to farming, Larry had a love of community and enjoyed gathering with friends.  He had spent 30 yrs. with the Shelby County Sheriff Office, 40 yrs. as a volunteer of the Jackson Center Fire Department, and 17 yrs. as an auxiliary member of the Jackson Center Police Department.  Larry was a Jackson Township Trustee for 28 years, a member of the Farm Service Agency Committee and the Shelby County Emergency Management Committee.

In the past, Larry had enjoyed hunting, was a Sunday School teacher, assisted with the church youth group and worked at Holloways Sportswear when located in Jackson Center.

Larry had cleared and maintained an area around a pond on what was initially his parent’s property.  This became known as “The Pond” to many. Several birthday’s, a wedding re-enactment, fireman’s parties, reunions, holiday’s and week-end camping activities have taken place there. Larry loved the peace and tranquility there to “get away” yet, be close to home.  Larry’s life was often centered on his family and fellowship with friends. Whether daytime “pow-wows” at “The Block”, evening “beverages, usually a Miller High-Life” after a day’s work, or that week-end gathering at “The Pond”, many tears, laughs, memories and “solving of world problems” he enjoyed being a part of and took with him.

Larry will be remembered by his “Big Laugh” that could be picked out in a crowd, his “Big Heart” as he was so willing and gave of himself to do for others and his former CB handle “Big Red” related to his passion for Case IH tractors.  He may also be remembered to some as a jolly man in a red suit, as he had assisted “Santa Claus” for nearly 50 yrs.

A small burial service will be held in Glen Cemetery, Port Jefferson on Monday August 24th, 2020. The family welcomes all whom wish to honor Larry with their tractor salute, to line State Route 65 on Monday August 24th by 10:45 for his procession to the cemetery to start at 11:00 am.

The family will have a memorial drive-thru in a few weeks, to be announced, after quarantining guidelines have been met, by the family members.

In all these situations, due to the current pandemic guidelines, it is asked that you only attend if you are Symptom Free, Wear a Mask and Practice Social Distancing.

The staff of the Eichholtz Daring & Sanford Funeral Home in Jackson Center is honored to serve the Sprague family.

To order memorial trees or send flowers to the family in memory of Larry L. Sprague, please visit our flower store.