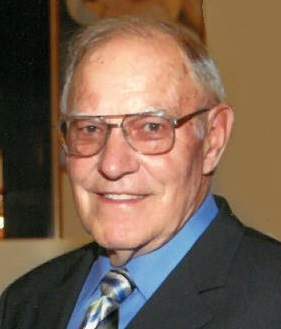 Vern was born in St. Henry, Ohio November 13, 1934, to the late Joseph and Loretta (Spoltman) Reichert. He was also preceded in death by a son-in-law, Brian Woodruff and two sisters, Mary Ann Schwieterman and Ruth Stelzer.

Vern retired from Super Foods in 1997 after thirty two years.  He was a member of the St. Mary of the Woods Catholic Church in Russells Point, Ohio.  Vern started and was owner/operator of Reichert Farm Drainage from 1972-1986. Vern was the man responsible for the initiation of the large wooden home-made signs that supported many area athletic teams who were participating in STATE tournaments. He was an avid basketball fan and enjoyed working in his wood shop. He donated many items to area churches and liked to make gifts for family and friends for special occasions. He built a rocking horse for each of his children’s kids.  He also enjoyed farming, sports, travel and family.  Vern served his country in the Army National Guard during peace time.

A Mass of Christian Burial will be celebrated Thursday, January 30, at 10:30 a.m. at the St. Mary of the Woods Catholic Church in Russells Point with Fr. Shawn Landenwitch officiating.

Burial will be at the Immaculate Conception Cemetery in Botkins, Ohio at 2 p.m.

To order memorial trees or send flowers to the family in memory of LaVerne J. Reichert, please visit our flower store.