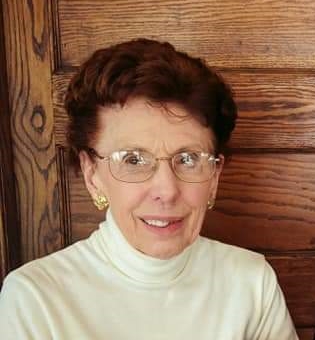 Linda Nadine (Landry) Tromblay, age 87, of Bellefontaine, passed away at 12:32 p.m. on Friday, March 4, 2022 at Traditions Assisted Living in Beavercreek, Ohio. She was born in Stanwood, Washington on October 14, 1934 to the late Ernest “Ernie” Gilbert and Velda Louella (Winters) Landry. A daughter, Melinda Smith in 2016; and brother Richard also preceded Linda in death.

On May 29, 1954, in Stanwood, Washington, she married James Joseph “Jim” Tromblay, and he also preceded Linda in death. Jim was a 20-year veteran of the U.S. Air Force stationed in Seattle, Washington.

Linda is survived by her sister, Emmalie (Larry) Silvester and children, Michele Tromblay, Yvonne (Charles) Elias and their children, Adrienne (Rick) Krysiak and their daughter, Charlotte, and Steven Elias and his fiancée Leslie Brown; Jean-Marie (Dan) Schiavone and her son, Paul Arelt; Joseph Tromblay and his fiancée Judi Wachendorf; Jeffrey Tromblay and his son, David (Tori) Tromblay; John (Michelle) Tromblay and their daughter, Kristen Tromblay; Suzanne Tromblay; and her late daughter’s husband, Rick Smith and their children, Amanda, Mariah, and Rachel Smith. She is also survived by her sister-in-law, Shirley Tromblay.

Linda graduated from Stanwood High School at the top of her class and attended the University of Seattle for 1 1/2 years as a vocal and organ major. At the age of 19, she married Jim and they lived in Seattle where their oldest daughter, Melinda, was born. Linda stayed home with the baby and began a sewing, alterations and knitting business from their apartment. The family was transferred to Anchorage, Alaska, where daughters Michelle and Yvonne were born. The family was then transferred to Clovis, New Mexico, where Jean-Marie, Joseph, Jeffrey and John were born. During this time, Jim was sent to Turkey for a year, while Linda and the children remained behind. The family then moved to Biloxi, Mississippi for 9 months for Jim to receive advanced training in radar. Jim was then transferred to Ramstein AFB in Germany, but Linda and the children moved to Stanwood, Washington to live with Linda’s parents due to a lack of housing for the family in Germany. Jim returned to the family in Stanwood, Washington where the youngest daughter, Suzanne was born. The family was then transferred to Bellefontaine, Ohio in 1967. Jim was deployed to Vietnam in 1968 and returned in 1969 after 13 months. He retired from the Air Force, but continued to work for Rockwell International for ten years and also repaired sewing machines for Linda’s shop.

During her married life and many moves, Linda continued to develop her home-based sewing, knitting and alterations business, which eventually outgrew the house. Linda moved the Sewing and Yarn shop and Viking sewing machine dealership to a retail shop in downtown Bellefontaine around 1991 and closed the shop in December of 2019. Linda and Jim were very active in St. Patrick’s Catholic Church over the decades in a variety of roles, lastly as ushers. At one time or another, Jim handled the recycling and Linda ran the coffee club, sewed altar cloths and banners, sang in the choir and was a lector. Throughout her life, Linda shared her love and unwavering faith in God, her positive attitude, sense of humor and kindness with everyone around her. She loved her family, church and community, babies, kittens, butterflies and knitting. Her home was a place where everyone was welcomed, loved, entertained with laughter and fed her famous waffles and apple pie. Her proudest moment this past year was to live to see the birth of her first great-grand daughter, Charlotte. Although she was a tiny woman, she had endless energy, a quick wit and she showed us all that you can achieve great things in life with humor, faith in God, humility, hard work and perseverance. She was a role model to us all and her shining light will be greatly missed.

Following the committal service, a meal will take place at the St. Patrick Church in Makley Hall.

In lieu of flowers, memorial contributions may be made to:

The staff of the Eichholtz Daring & Sanford Funeral Home & Cremation Center in Bellefontaine is honored to serve the Tromblay family.

To order memorial trees or send flowers to the family in memory of Linda Nadine Tromblay, please visit our flower store.
Send a Sympathy Card