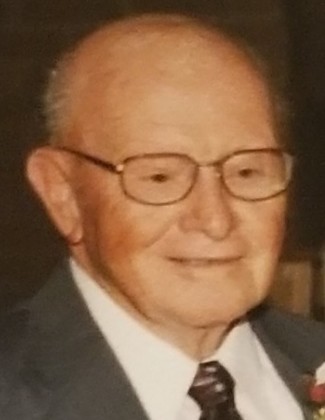 He was born in Shelby County Ohio September 7, 1918, to the late George Ludwig and Emma Magdalene (Klopfenstein) Mann. Along with Luther’s parents and his first wife, he was also preceded in death by daughters, Jean Sell and Gail Mann; a son, Paul Mann; son-in-law, Kevin Sell and sisters, Lucille Oakley, and Helen Griffith.

Luther was a member of the Grace Lutheran Church in Jackson Center, a member of the Farm Council in Jackson Center, the Shelby County Draft Horse Association, and the Western Square Dance Club.  He was a lifelong farmer and began farming with horses.  Luther worked for the Landmark Elevator in Sidney for many years.  He enjoyed camping and traveling all over the United States.  All who knew and loved Luther will miss him.

Rev. Dr. Cathi Braasch will officiate the funeral service at 11:00 A.M. following visitation at the church.

To order memorial trees or send flowers to the family in memory of Luther W. Mann, please visit our flower store.
Send a Sympathy Card