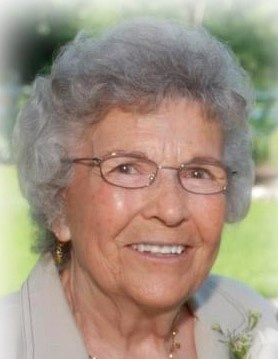 Mabel Lucille (Campbell) Freese was welcomed into the arms of her heavenly Savior, Wednesday, January 20, 2021 at Green Hills Community in West Liberty, Ohio.

She was born August 5, 1930 in Lewistown, Ohio to the late Roy and Dorothy (Armentrout) Campbell.

In addition to her parents, Mabel was preceded in death by her sister and brother-in-law Olive (Walter) Engle; three brothers and sisters-in-law, Clifford (Dixie) Campbell, Bill (Lucille) Campbell and Roger Campbell and a sister-in-law, Janet Campbell.

Mabel was a cashier for Mohr’s Market for 10 years. She was the produce manager at Fuson’s IGA (and later Fawcett’s IGA) in DeGraff for 25 years. She was a member of the DeGraff United Methodist Church and served as a Sunday school teacher and was active with the United Methodist Women. In later years, she was a member of Grace Chapel in West Liberty and served on the hospitality committee and was also involved in Bible studies. She was a co-leader with DeGraff 4-H Sewing Club.

She was dearly loved by her family and friends. Her children, grandchildren and great grandchildren were the dearest blessings of her life along with her Lord and Savior Jesus Christ.

She was a very well-respected mother, grandmother, great grandmother, aunt, sister and friend who loved deeply in word and deed, placing others above herself.

The family will receive friends from 2 to 4 p.m. Sunday, January 24, 2021 at the Grace Chapel Church in West Liberty, Ohio where Pastor Zach Dudenhofer will officiate the funeral service at 11:00 a.m. Monday, January 25, 2021.

Burial will follow the funeral service at the Greenwood-Union Cemetery in DeGraff, Ohio.

Memorial contributions may be made to the Cystic Fibrosis Foundation, 740 Lakeview Plaza Boulevard, Columbus, Ohio 43085 in honor of her great-grandson Barrett Jankowski.

The staff of the Daring & Sanford Funeral Home in DeGraff is honored to serve the Freese family.

To order memorial trees or send flowers to the family in memory of Mabel Lucille Freese, please visit our flower store.
Send a Sympathy Card