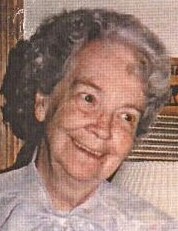 On April 6, 1947, Lucile married Benjamin Leroy Lusby in Bellefontaine and he preceded her in death February 12, 1999. She was also preceded in death by her son, David Lusby and a brother, Clarence J. Amos.

A 1940 graduate of Bellefontaine High School, Lucile had worked at A&C Dime Store – WH Marvin in Urbana and Zerbee Hilleker plant. She was a member of the Logan County Historical Society and enjoyed baking and crocheting. She crocheted over one hundred afghans and gave them to the Veteran Home.

A graveside service was conducted Tuesday, September 22, 2020 at the Highland Memorial Cemetery in West Liberty, Ohio.

The staff of the Eichholtz Daring & Sanford Funeral Home & Cremation Center in Bellefontaine is honored to serve the Lusby family.

To order memorial trees or send flowers to the family in memory of Margery Lucile Lusby, please visit our flower store.
Send a Sympathy Card