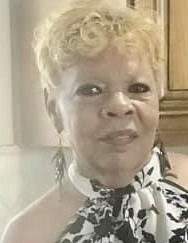 Maria Yvonne LyBurtus, 65, passed away May 26, 2021 at home. Von was preceded in death by her parents, Donald Dwayne and Gloria LyBurtus; a sister, Brenda McBeth and a brother, Donald Dwayne LyBurtus Jr.​

Maria, or “Von” as she was so affectionately called, raised her three children in Bellefontaine.  She and her oldest son, Dyondo LyBurtus ultimately settled in Columbus, Ohio. Dyondo lovingly cared for Von until her passing.  Von enjoyed the simple things in life such as a phone call or visit with friends and family and enjoyed her three children, six grandchildren, and two great grandchildren the most.  She would assign a nickname to each grandchild when they were born; the nicknames often stayed with them into adulthood.  Von often traveled to California and South Carolina to visit her children and their families.  She loved watching her grandchildren play sports and perform in dance recitals and was their biggest fan.  Her infectious laugh and “Von dance” was well known by her friends and family.

Visitation will be held at at the Eichholtz Daring & Sanford Funeral Home & Cremation Center in Bellefontaine from 12:00 p.m. to 2:00 p.m. Wednesday, June 2, 2021 immediately followed by a memorial service at 2:00 p.m.  The service will be live streamed via Facebook Live thru the funeral home’s Facebook page https://www.facebook.com/daringsanford

The family will hold a reception at 4 p.m. at Young’s Building & Events in Bellefontaine.

“And he will wipe out every tear from their eyes, and death will be no more, neither will mourning nor outcry nor pain be anymore. The former things have passed away.” Revelation 21:4

The staff of the Eichholtz Daring & Sanford Funeral Home & Cremation Center in Bellefontaine is honored to serve the LyBurtus family.

To order memorial trees or send flowers to the family in memory of Maria Yvonne LyBurtus, please visit our flower store.