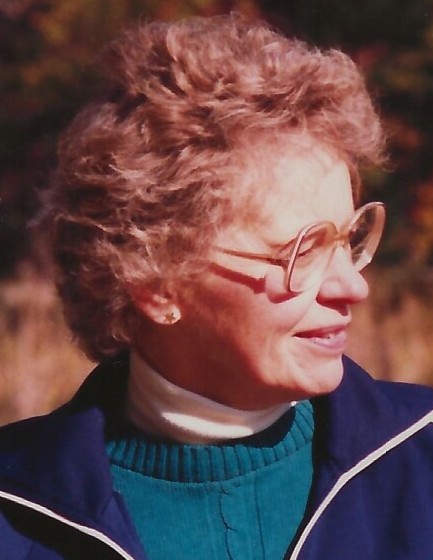 Martha Marine died gracefully with her daughter by her side on December 5, 2021, in the Emerald Care Unit at Green Hills Community in West Liberty, Ohio. Martha was born on January 11, 1933, in Bellefontaine, Ohio, to Ann Wortman (nee Peterson) and G. Horace Wortman.

Martha was an educator by heart. Not only did she teach for more than 30 years in the Bellefontaine school system, she also taught Sunday School, was a docent at the Logan County History Center, served as English instructor for Honda Japanese executives, and was a lifelong resource to her family, her friends and anyone who sought her knowledge and insights.

In high school, she excelled in Latin, where she always claimed to have the privilege of being a student of Grace Otte, who gave her the “only ‘B’ I ever got”. After her freshman year at Ohio University, she married Arthur Eugene “Gene” Marine on December 23, 1951. She then went on to have three children, Steve, Tom and LeAnn. But, her academia-calling was strong and she went back to school to become a certified teacher. In 1972 she graduated with her degree in education, one of her proudest accomplishments in a life full of many.

As a child, her mother was fond of saying that Martha was the perfect child. She did not do anything wrong and they had a relationship that mothers and daughters would envy, culminating with her mother spending the last six months of her life with Martha and Gene, six months after her father passed. Coincidentally, Martha died almost exactly six months after her soulmate/life-mate/husband Gene. Gene frequently referred to Martha as the love of his life, the perfect wife, and the perfect mother. She was not a disciplinarian, but she was the disciplined role model for her children, who can still hear her say “make your bed”, “do your homework”, and “eat your peas”. If there was anything she was not good at, it was her cooking, but the appetites of growing children and a busy husband did not suffer. Martha’s mantra on food was “we don’t live to eat; we eat to live.”

Martha was also a favorite aunt to her brother’s children, a wonderous grandmother and a doting great-grandmother.

Martha and Gene were faithful servants of several churches during their lives, including the First Christian Church and the First United Presbyterian Church. But, her avocations were many and varied outside the church. She was an avid Bridge player. She loved to go hiking at State Parks. And, she loved to travel, including trips to the Holy Land, United Kingdom, Germany, Italy, Greece, Hawaii, the Grand Canyon, and many other places in the U.S. But her favorite destination was Oak Island, North Carolina, where her family joined her and Gene on many occasions.

It wasn’t unusual to continue her self-learning on all road trips, usually by stopping and reading most roadside markers and sharing her new-found knowledge with her fellow travelers.

Martha was preceded in death by her husband of nearly 70 years (December 23, 1951), Arthur E. “Gene” Marine; her parents; and a brother John Carter Wortman of Piqua/Indianapolis.

Services for June 4, 2022 are anticipated

For those who wish to make donations in Martha’s name, the family suggests the Alzheimer’s Association (  https://www.alz.org/  ) and Green Hills Community (  http://www.greenhillscommunity.org/donate.html  ), and greatly appreciates your generosity and your affection for Martha.

The staff of the Eichholtz Daring & Sanford Funeral Home & Cremation Center in Bellefontaine is honored to serve the Marine family.

To order memorial trees or send flowers to the family in memory of Martha Marine, please visit our flower store.
Send a Sympathy Card