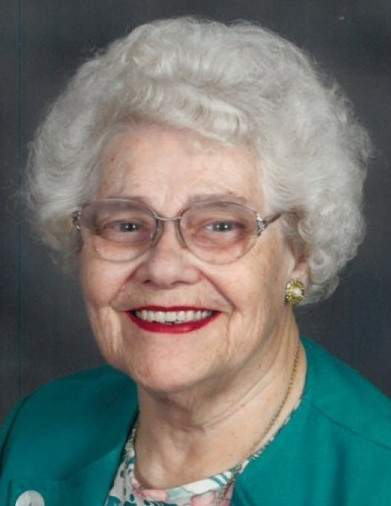 She was born in Logan County Ohio January 7, 1930, to the late William Henry and Orpha Mabel (Richesen) Shields.  Martha was born again, a child of God in the year 1965.

Martha married Richard Cecil Stevens October 12, 1957 in Angola, Indiana, and he preceded her in death August 4, 1986.  She was also preceded in death by five brothers, Harry, Howard, Orville, Albert and William Shields and a sister, Minnie Drake.

A proud graduate of Belle Center High School, Martha was a lifelong member of the Bellefontaine First Church of God where she was active with the choir, a church greeter, and a Sunday school teacher for many years.  Martha worked as a waitress at the Logan Coffee Shop and at Silco of Bellefontaine.  She was a member of the Harrison Grange, active with the UAW Ford Retirees, volunteered with the Red Cross and community blood drives, worked as a poll worker for Liberty Township, and bowled for twenty plus years with the Wednesday Morning Breakfast Club.  She and her husband Richard were members of the Hi Point See Saws and enjoyed pitching horseshoes as members of the West Liberty Horseshoe Club.  In Martha’s own words, she loved God, loved people, and loved life.

Pastor Ron Irick will officiate the funeral service for Martha Friday, November 22, 2019, at 10 a.m. at the Bellefontaine First Church of God.  Visitation will be held Thursday, November 21, 2019 at the Eichholtz Daring & Sanford Funeral Home & Cremation Center in Bellefontaine from 2 to 6 p.m.

Burial will be at the Walnut Hill Cemetery in New Hampshire, Ohio.

To order memorial trees or send flowers to the family in memory of Martha Ruth Stevens, please visit our flower store.