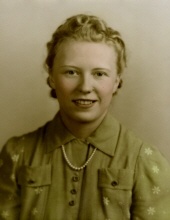 Patti was born April 17, 1923, to John A. and Clarabel Richardson Piatt in West Liberty, Ohio. She graduated from West Liberty High School in 1941 where she excelled in basketball. She was a lifelong resident of West Liberty and was a member of the West Liberty Presbyterian Church, Daughters of American Revolution, Logan County Historical Society, Holland Theatre, and was an 80-year member of the American Legion Auxiliary and enjoyed bridge and golf. She worked many years at the West Liberty Post Office and the village’s election board. She began working for Huntington Bank in 1969 and after retirement enjoyed retiree luncheons for many years. During her extended visits with family in Georgia, she enjoyed watching her grandchildren’s soccer and basketball games as well as Valdosta State University men’s and ladies’ basketball and Valdosta Symphony.

Patti married Blair Metz October 28, 1940, and he preceded her in death May 5, 1995. She was pre-deceased by her parents; brothers, Jack Piatt, Jimmy (Mary) Piatt; a sister, Kathleen (Don) Thompson and a son-in-law, Ken Hilyer.

The family will receive friends from 10 to 11 a.m. Friday, April 22, 2022 at the Eichholtz Daring & Sanford Funeral Home in West Liberty, where Pastor Bryan Meadows will officiate the funeral service beginning at 11:00 a.m.

Burial will follow the funeral service at thje Fairview Cemetery in West Liberty.

Memorial contributions can be made in Patti’s memory to:

The staff of the Eichholtz Daring & Sanford Funeral Home in West Liberty is honored to serve the Metz family.

To order memorial trees or send flowers to the family in memory of Mary Patricia Metz, please visit our flower store.