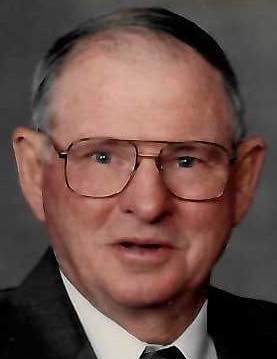 Ned was born October 13, 1923, the son of the late Leon and Martha (Lamberton) King.  He was also preceded in death by an infant son and two brothers, Joe and Richard King.

Ned graduated from West Liberty High School where he enjoyed cheerleading with his friend, Jack Craig.  He served his country in the U.S. Army during WWII and was a member of the West Liberty United Methodist Church.

Ned was a dedicated husband and father and spent his life farming.  He loved the land and the animals God created.  His family remembers the sound of the tractor working late into the night and early in the morning.  He was a man who called each of his dairy cows by name and would take extra time to plow around the ground nest of a whippoorwill.  During the blizzard of 1978, he and his wife walked through the storm to the barn half a mile away to mike and feed the cows and then spent the night together in the milking parlor until they could be rescued by snowmobile after milking again the next day.  His undeniable work ethic and perseverance will be remembered by his family and friends.

A private graveside service will be held for the members of the family.

The staff of the Eichholtz Daring & Sanford Funeral Home in West Liberty is honored to serve the King family.

​(authored by the family)

To order memorial trees or send flowers to the family in memory of Ned L. King, please visit our flower store.