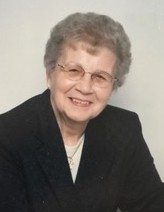 Peggy L. Gross, 91, of Route 5, Wapakoneta passed away on Sunday, August 9, 2020 at Logan Acres Care Center, Bellefontaine, Ohio. Peggy was born on September 2, 1928 in Logan County. She was the only daughter of Robert Huffer and Lola (Ohler) Huffer. She was preceded in death by her parents and two brothers Paul A. Huffer and Byron W. Huffer. She graduated from Jackson Center High School in 1946 and on February 2, 1947 married her high school sweetheart, Ivan M. Gross, who preceded her in death on July 31, 2002.

Peggy was a homemaker and a devoted wife and mother of four children. She was a lifelong and faithful Christian and a member of Christ the King Church, Montra, Ohio. She is survived by her three sons: Steve Gross of Uniopolis, Ohio; Michael Gross of Uniontown, Ohio; Thomas Gross of Chesapeake, Virginia; her daughter, Jill (Gross) Howard of Barre, Vermont; and two daughters-in-law and one son-in-law. Peggy has been blessed with 11 grandchildren and 23 great grandchildren. The family will honor her at 10:00 a.m. on Wednesday, August 12, 2020, at a private graveside ceremony at Mt Tabor Cemetery on Gutman Road in Clay Township.

The staff of the Eichholtz Daring & Sanford Funeral Home in Jackson Center is honored to serve the Gross family.

To order memorial trees or send flowers to the family in memory of Peggy L. Gross, please visit our flower store.
Send a Sympathy Card