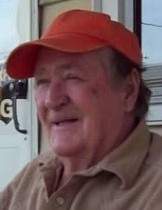 He was born September 19, 1932 in Oka, West Virginia a son of the late Henry C. and Louisa Belle (Lane) Boggs.

Ron worked for Knowlton Construction for twenty five plus years before driving truck for Super Foods until his retirement where he was a member of the Teamsters and received many Safe Driving awards.  He enjoyed gardening, hunting and working and fixing things for friends and family.  He was a craftsman and always had a joke to share.  He loved his family and was always a very giving man who helped many people over the years.

Visitation will be held Saturday two hours prior to the memorial service at the funeral home.

Burial will be in the Boggs family plot at the Cottrill Cemetery in Oka, West Virginia at a later date.

The staff of the Eichholtz Daring & Sanford Funeral Home & Cremation Center in Bellefontaine is honored to serve the Boggs family.

To order memorial trees or send flowers to the family in memory of Ronzle C. Boggs, please visit our flower store.