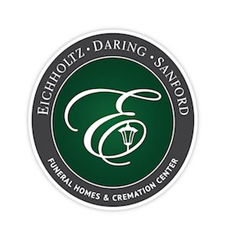 She married Bert D. Brugler of Bellefontaine in 1942, and he preceded her in death August 21, 1976.  Eileen was also preceded in death by a sister, Donna Dachenbach and a brother, Philip Siegenthaler.

Eileen is survived by her son and daughter-in-law, Robert and Barbara Brugler of Worthington, Ohio; a granddaughter, Laura; a sister, Janet Chamberlen of Charlottesville, Virginia and nieces and nephew.

Eileen was a graduate of Bellefontaine High School class of 1940 and was a member of the First United Methodist Church in Bellefontaine.  She had worked as a seamstress at Huber-Buchenroth for thirty five years before retiring.

Eileen will be interred at the  Rushsylvania Cemetery in Rushsylvania, Ohio beside her husband.

To order memorial trees or send flowers to the family in memory of Ruby Eileen Brugler, please visit our flower store.
Send a Sympathy Card