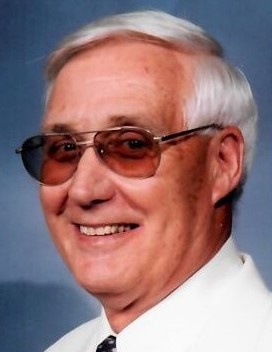 Russell D. Williams, age 89, of Bellefontaine, Ohio and formerly of Huntsville, Ohio passed away Sunday, April 26, 2020 at the Campbell Place in Bellefontaine.

He was born in Youngstown, Ohio June 6, 1930, a son of the late Russell Davis and Helen (Rogers) Williams.

In addition to his parents, he was preceded in death by his twin brother, Robert Roger Williams and his younger brother, Donald James Williams.

On June 12, 1954, he married Lois Tenney in Steubenville, Ohio and she survives in Bellefontaine along with their children, Thomas (Nancy) Williams of Clintonville, Ohio, David (Lynne) Williams of Murphy, North Carolina and Mary Jo (Martin) Cherup of Delaware, Ohio; eight grandchildren and six nieces and nephews.

Russell graduated from South High School in Youngstown before going to Mt. Union College where he obtained his bachelor’s degree.  He furthered his studies at the Pittsburgh-Xenia Theological Seminary graduating with his master’s degree.  He pastored churches in Wickliffe, Ohio and North Benton, Ohio before re-enlisting in the United States Air Force where he served his country as a chaplain.  He served twenty years, serving in both the Korean and Vietnam Wars before his honorable retirement in 1981.  It was at that time he moved to Huntsville and became the pastor of the Huntsville Presbyterian Church for the next nineteen years until he retired in 2000.

The family will have a private graveside service at the Harrod Cemetery in Huntsville.

In lieu of flowers, memorial contributions may be made to the Campbell Place.

The staff of the Eichholtz Daring & Sanford Funeral Home & Cremation Center in Bellefontaine is honored to serve the Williams family.

To order memorial trees or send flowers to the family in memory of Russell D. Williams, please visit our flower store.
Send a Sympathy Card