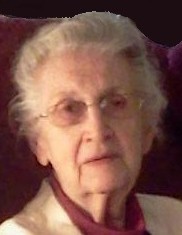 Ruth was born May 20, 1926, in Brentwood, Maryland to the late Newton and Nellie Burkholder Weber.  She was predeceased by her husband Jack; sisters, Naomi and Rhoda and a brother, John.

Ruth lived in Waterloo, Ontario, and Fort Wayne, Indiana during her early childhood years.  As a teenager she attended Eastern Mennonite School in Harrisonburg, Virginia graduating in 1943.  She then moved to Washington D.C. with her sister Naomi where they worked for a Navy Admiral's family assisting in management of the household and children.

In 1946, her family moved to West Liberty where her father served as Pastor of the Bethel Mennonite Church where she became a member and has remained a faithful member for more than seventy five years.  In January 1948, she married Jay Warren (Jack) Yoder at Bethel Church by her father, Rev. Newton Weber and Jack’s grandfather Bishop S.E. Allgyer.

The doors to the old farmhouse were always open over the years for family and friends whenever they visited. The home also served as a home away from home for a number of folks over the years, whether it was just for a short time or for an extended period.  Each person brought experiences and personalities that impacted Ruth’s family life.

Volunteering was also important, and Ruth participated in volunteer projects through her Sunday School class and Women’s MCC group. She also gave her time at the local Thrift Shop, the Adriel Auxiliary and over 3,000 hours at Mercy Hospital in Urbana.

A celebration of her life is planned for Saturday, August 28, 2021 at 11:00 a.m. at the Bethel Church in West Liberty.  We are hopeful to provide an online access to the service. If that is of interest, please contact keith.j.yoder@gmail.com

The staff of the Eichholtz Daring & Sanford Funeral Home in West Liberty is honored to serve the Yoder family.

To order memorial trees or send flowers to the family in memory of Ruth Marie Yoder, please visit our flower store.
Send a Sympathy Card