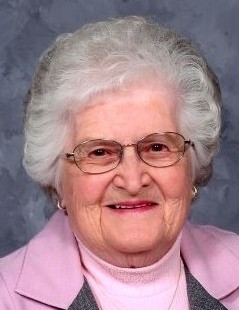 She was born in Belle Center, Ohio October 2, 1928, to the late Samuel H. and Verna Estella (Copeland) Jenkins.

On March 1, 1947, Ruth married Orville M. Regula in Jackson Center and he preceded her in death April 25, 1992. She was also preceded in death by her brother and sister-in-law, Leonard H. (Doris) Jenkins.

Ruth is survived by her daughter Karen Kay (Jerry) Knief of DeGraff, Ohio.

The family will receive friends from 4 to 7 P.M. Thursday, September 19, 2019 at the Eichholtz Daring & Sanford Funeral Home in Jackson Center.

Pastor David Sanders will officiate the funeral service at 10:00 A.M. Friday, September 20, 2019 at the Emanuel Lutheran Church in Montra.

To order memorial trees or send flowers to the family in memory of Ruth E. Regula, please visit our flower store.
Send a Sympathy Card