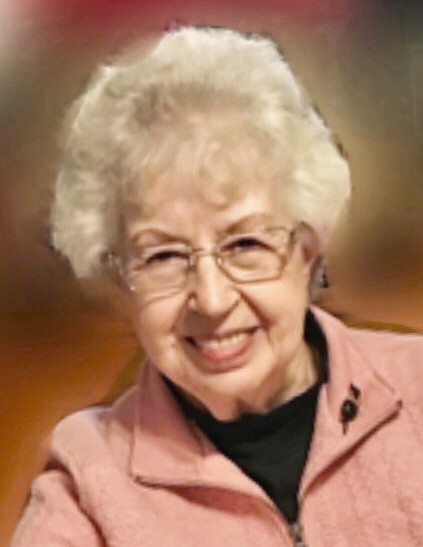 Suzanne, ‘Suzy’, Hostetler, a lifelong resident of West Liberty, Ohio, passed away on Wednesday afternoon, January 6 2021, surrounded by her family in the comfort and peace of her home.

Suzanne was borne on 8 February 1935 in West Liberty the third child of Jay B. ‘Snitz’ Snyder and Helen Opal (Holmes) Snyder.  She married Karl H. Hostetler, in 1953.  Their marriage spanned over 60 years until Karl preceded her in death in 2016.  Suzanne was also preceded in death by her parents, sister Martha Jane (Phillip) Stanley, and brother James (Ami) Snyder.

A graduate of West Liberty High School, Suzanne worked briefly in the Principal’s Office at her alma mater, after which she joined Nelson Insurance Agency, where she worked for over 45 years.

Suzanne was a lifelong member of the United Church of Christ where she volunteered her services in many capacities. She was also a longstanding member of the Monday Afternoon Literary Club of West Liberty, Mac O Chee Home Extension Club, Missionary Aid Society, and played an active role in the community supplying friends and neighbors with the best cookies in the known universe. She also conducted Bible studies at Marion Correctional Institute as well as with Kairos Prison Ministry, where she touched many lives.

It was Suzanne’s wish that any memorial service be delayed until such time as it can be conducted safely.

The staff of the Eichholtz Daring & Sanford Funeral Home in West Liberty is honored to serve the Hostetler family.

To order memorial trees or send flowers to the family in memory of Suzanne Hostetler, please visit our flower store.