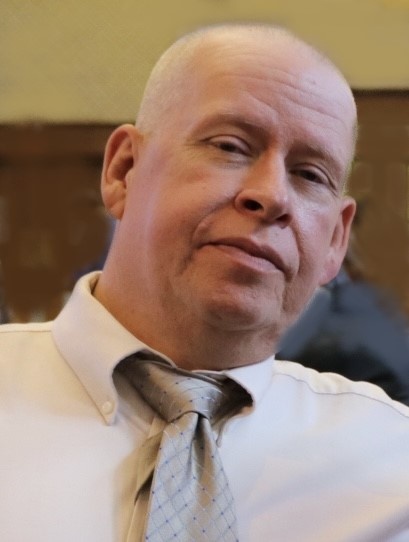 He was born in Columbus April 20, 1968, a son of the Lester “Buck” Taylor, who preceded him in death, and Patricia (Lewis) Taylor, who survives in Marysville.

On September 12, 1998, he married Christine A. (Moore) Taylor and she survives along with three children, Justin Taylor, Joshua Taylor, and Kaitlyn Taylor, all of Belle Center, Ohio; a granddaughter, Charlotte; two brothers Randy (Cassy) Taylor of Dublin and Tim Taylor of West Jefferson, mother-in-law, Helen Moore and sister-in-law, Deborah (Ronan) Factora, all of North Royalton, a brother-in-law, Bill Stover of Galloway and many nieces, nephews and close friends.

Terry graduated from Westland High School in 1986 and attended Hocking College.  He graduated from Central Ohio Technical College with a degree in Ohio Peace Officer Training and worked as a police officer for Franklin Township Police Department from 1993 to his retirement in 2015, where he was kindly referred to as “T-Bone”.  He was also a reserve deputy for both the Franklin and Hocking County Sheriff Departments and a former member of the Franklin County Sheriff’s Office Pipes & Drums.

In addition to his father, he was preceded in death by a sister-in-law, Michelle (Moore) Stover and his father-in-law, Thomas Moore.

Father Patrick Toner will celebrate a Mass of Christian Burial at 11:00 a.m. Monday, June 20, 2022, at the St. Mary Magdalene Catholic Church in Columbus.

Visitation will be held from 2 to 5 p.m. Sunday, June 19,2022 at the Eichholtz Daring & Sanford Funeral Home & Cremation Center in Bellefontaine and again on Monday, one hour prior to the Mass at church.

Memorial contributions may be made to an educational fund being set up for Terry’s children and envelopes will be available at the funeral home.

The staff of the Eichholtz Daring & Sanford Funeral Home & Cremation Center in Bellefontaine is honored to serve the Taylor family.

To order memorial trees or send flowers to the family in memory of Terry L. Taylor, please visit our flower store.
Send a Sympathy Card