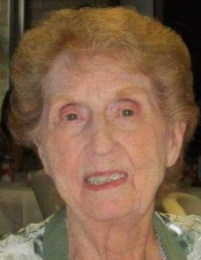 She was born in Bellefontaine April 19, 1927, a daughter of the late Humbert A. and Nancy J. (Stevens) Linkinhoker.

On July 28, 1947, she married Harold Edward Engelhaupt in Covington, Kentucky and he preceded her in death March 30, 1999. She was also preceded in death by a son, Harold Edward “Ed” Engelhaupt II in 1987; a great grandson, Caleb Chamberlin in 2019; two sisters, Eunice F. Boykin and Bessie Milner and two brothers, Frank and John E. Linkinhoker.

Virginia attended Bellefontaine schools and after marrying Harold, worked as a homemaker.  She was a longtime member of the Bellefontaine Church of the Brethren.  She was a wonderful cook and baker and loved hosting meals for your entire extended family.  She was well-known for her pie making ability.  Her family was her life and she loved to get together with them as often as they could and they referred to her as “Greatest Grandma”.  She and her husband were very giving people and were always helping others while remaining humble.

Visitation will be held two hours prior to the funeral service Saturday at the funeral home.

COVID-19 precautions will be followed and we ask you be symptom-free if attending the services.

The staff of the Eichholtz Daring & Sanford Funeral Home & Cremation Center in Bellefontaine is honored to serve the Engelhaupt family.

To order memorial trees or send flowers to the family in memory of Virginia R. Engelhaupt, please visit our flower store.
Send a Sympathy Card